After 5 months of work – the garage is at a point where Im calling it done.  There are certainly little things here or there that need finishing – but from a usability perspective we’re back to having a garage.  Here are some pictures that show the work from various angles… 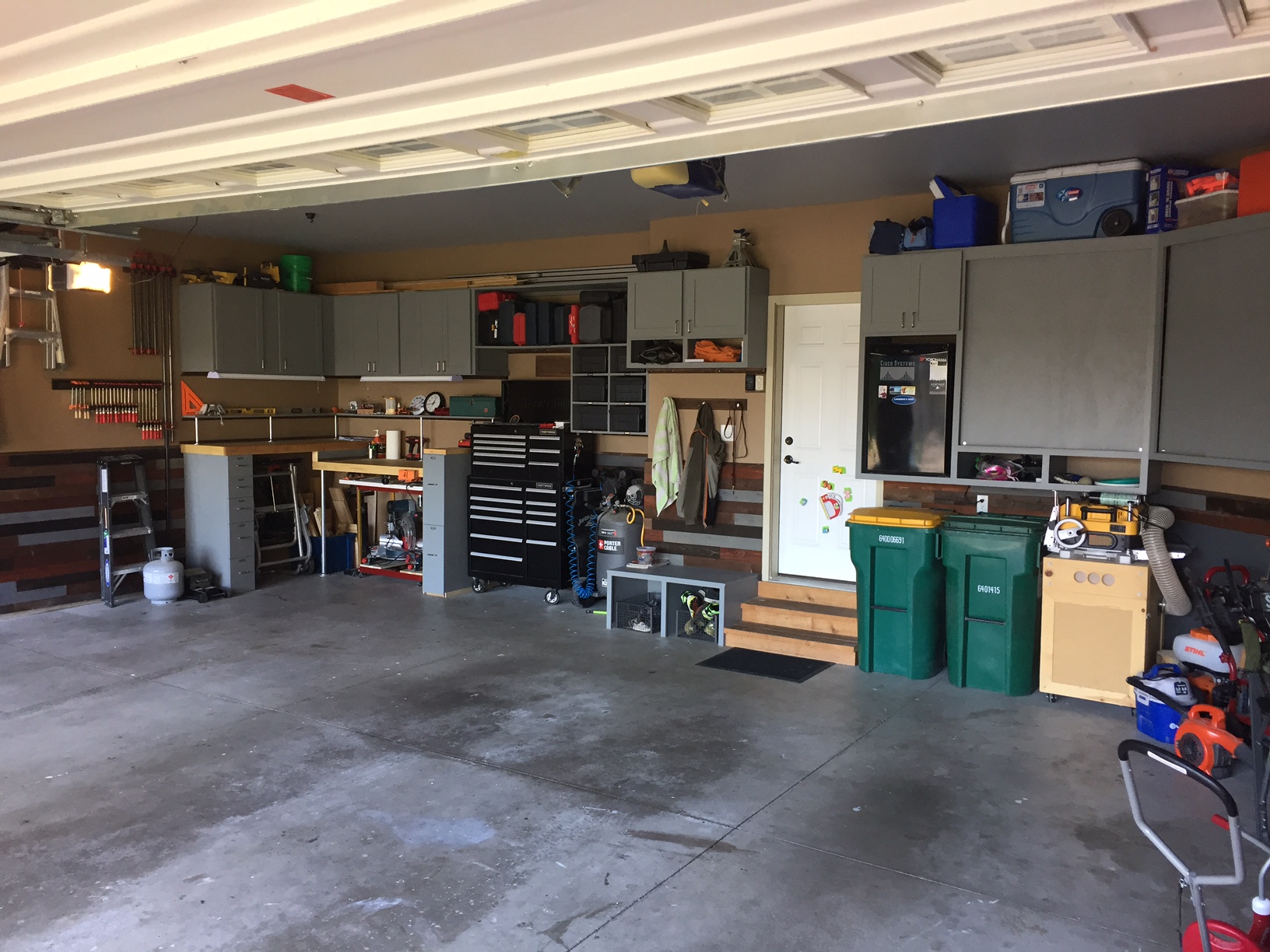 Here you can see the largest chunk of the garage in one shot.  I like to think (or actually don’t like to think) about how unorganized the garage was before all this work. 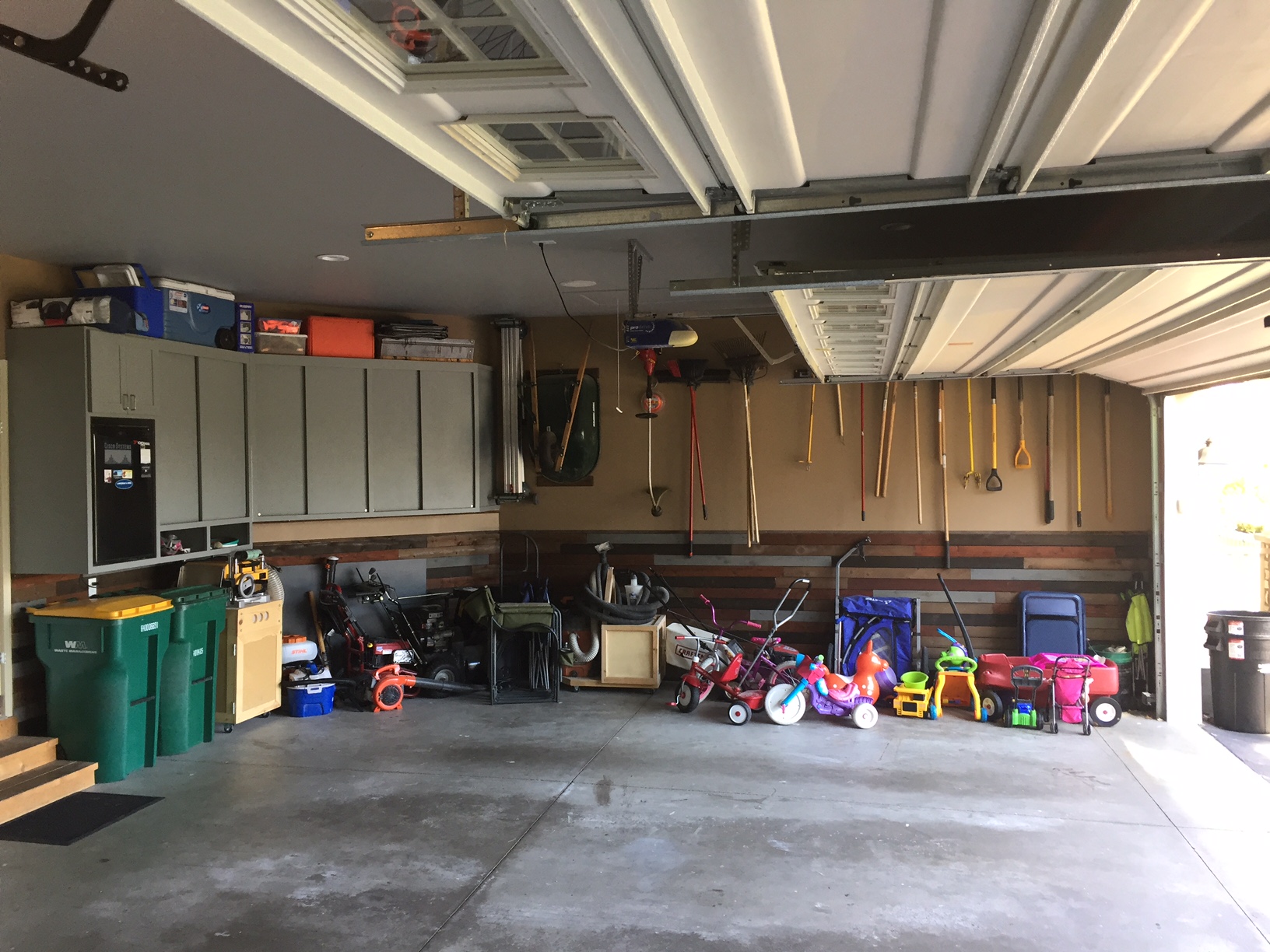 The one thing I cant do much with is the kids toys.  Those are going to take up space regardless of what I do during the summer months.  Come winter, they can go in the garage attic but for now they’re stuck there.  I had also hoped to find a better way to store yard tools but hanging them on the wall turned out to be the only way I could think of without burning more space.  I also managed to get the wheel barrel and the stand for my miter saw on the wall which saved a lot of space.  I think at some point Im going to tackle a stand for the snow blower so I can get the lawn mower underneath it.  We’ll see…. 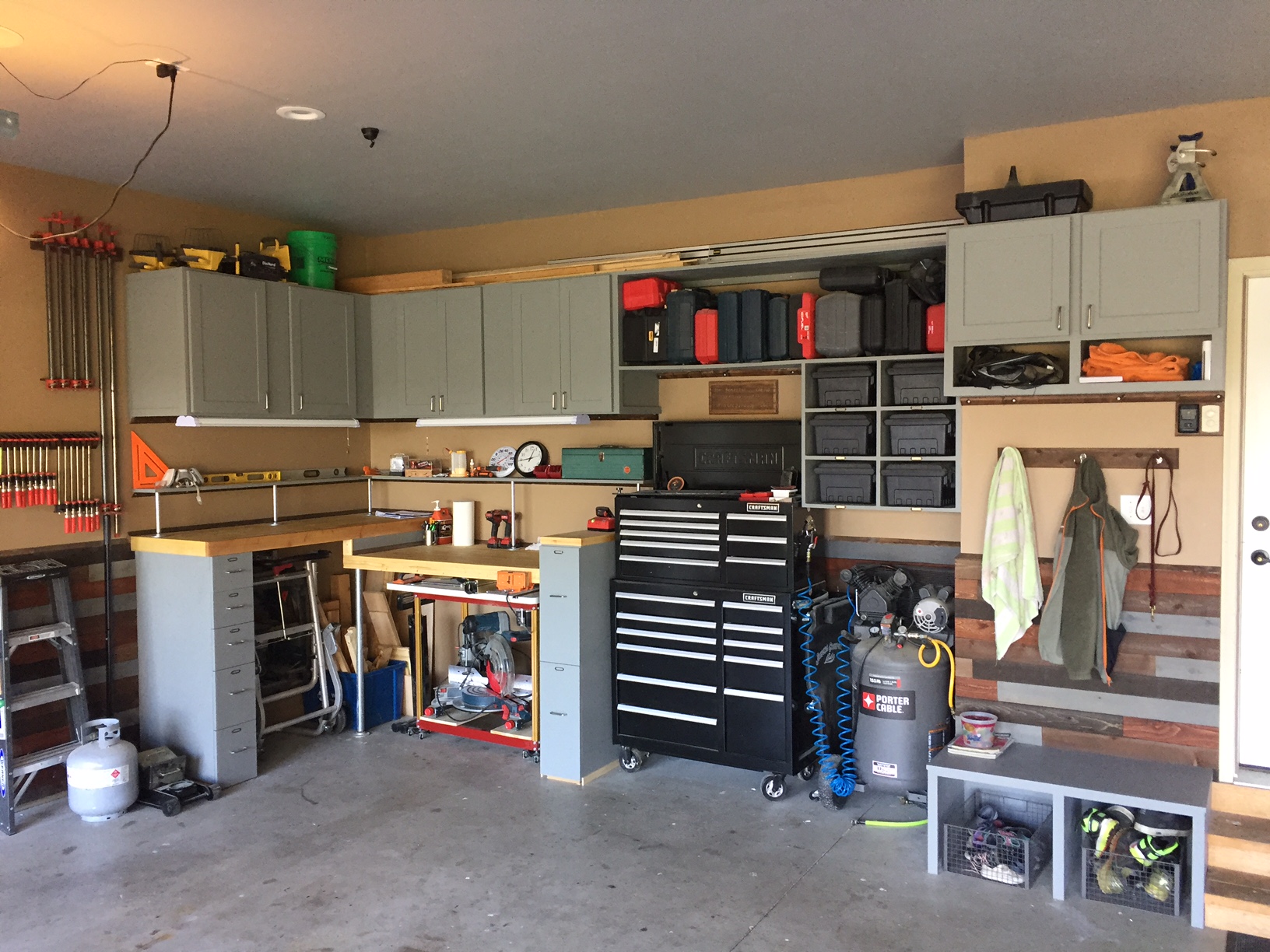 Im pretty happy with how my work bench area turned out.  Initially I had both work spaces at the same higher height (Jon Height) but then I decided to lower one to a more normal height as well.  Im glad I did that.  I didn’t take a picture of the drawers – but the ones on the right hold part bins and the ones on the left are individual slide out drawers.  I sort of built them without a use case in mind so Im trying to sort out what to use them for at this point.  This section of cabinets had the most cabinet doors.  Im pretty pleased with how they turned out as well. 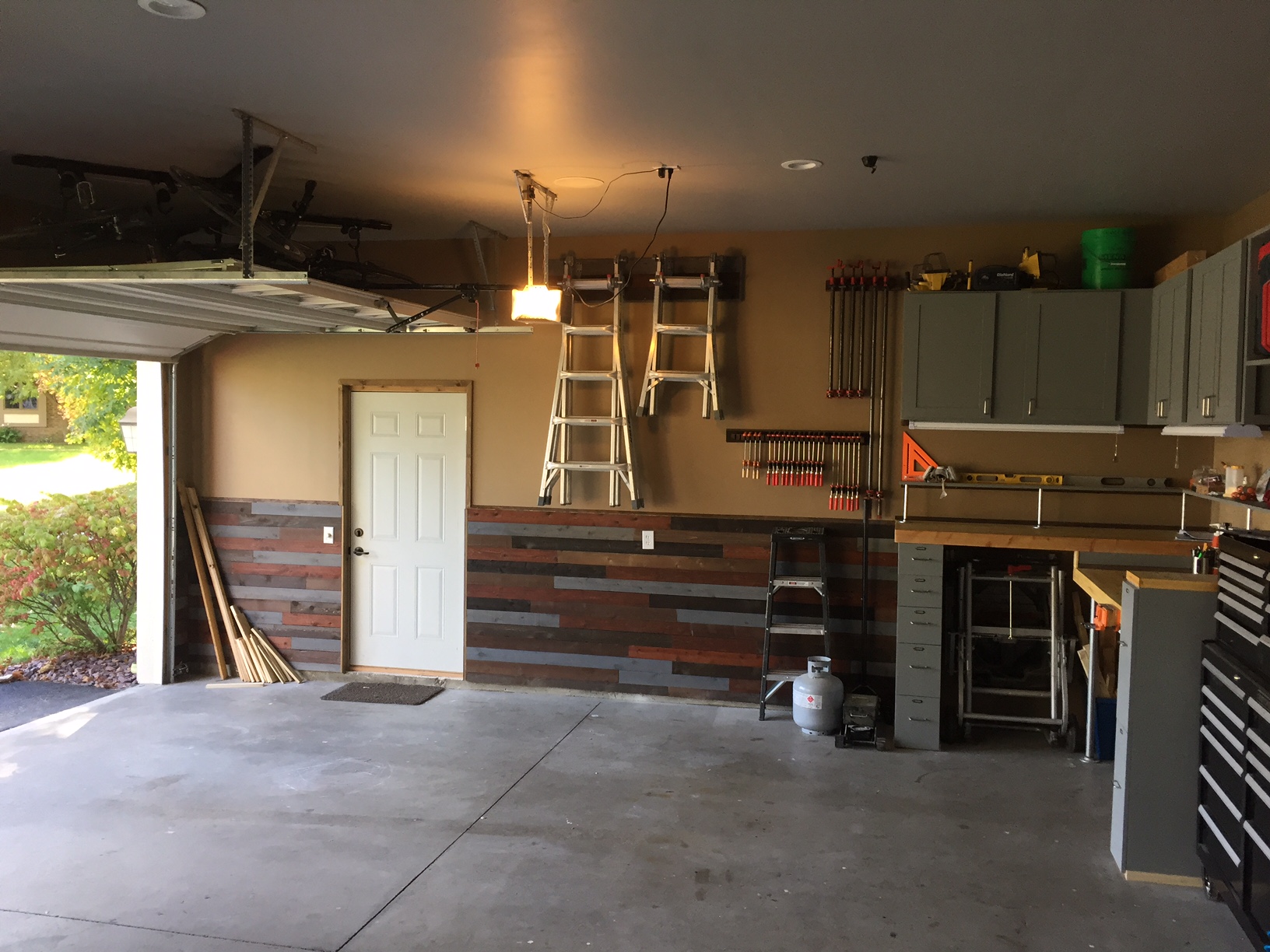 I havent fully used the wall space on this side of the garage but I did manage to get the ladders and the clamps on the wall so that’s a win.  I think the clamps used to live in a pile before.  The door trim was a pain to do mostly because the door wasnt installed evenly.  I had to plane one of the side jambs down almost 1/2 an inch to get it to go in.  Hard to see – but you can also see the bike hangers I found above the garage door.  They’re made by a company called FloaterHoist and they allow me to hang the bikes horizontally.  They actually fit above the garage door.  A huge space saver for sure. 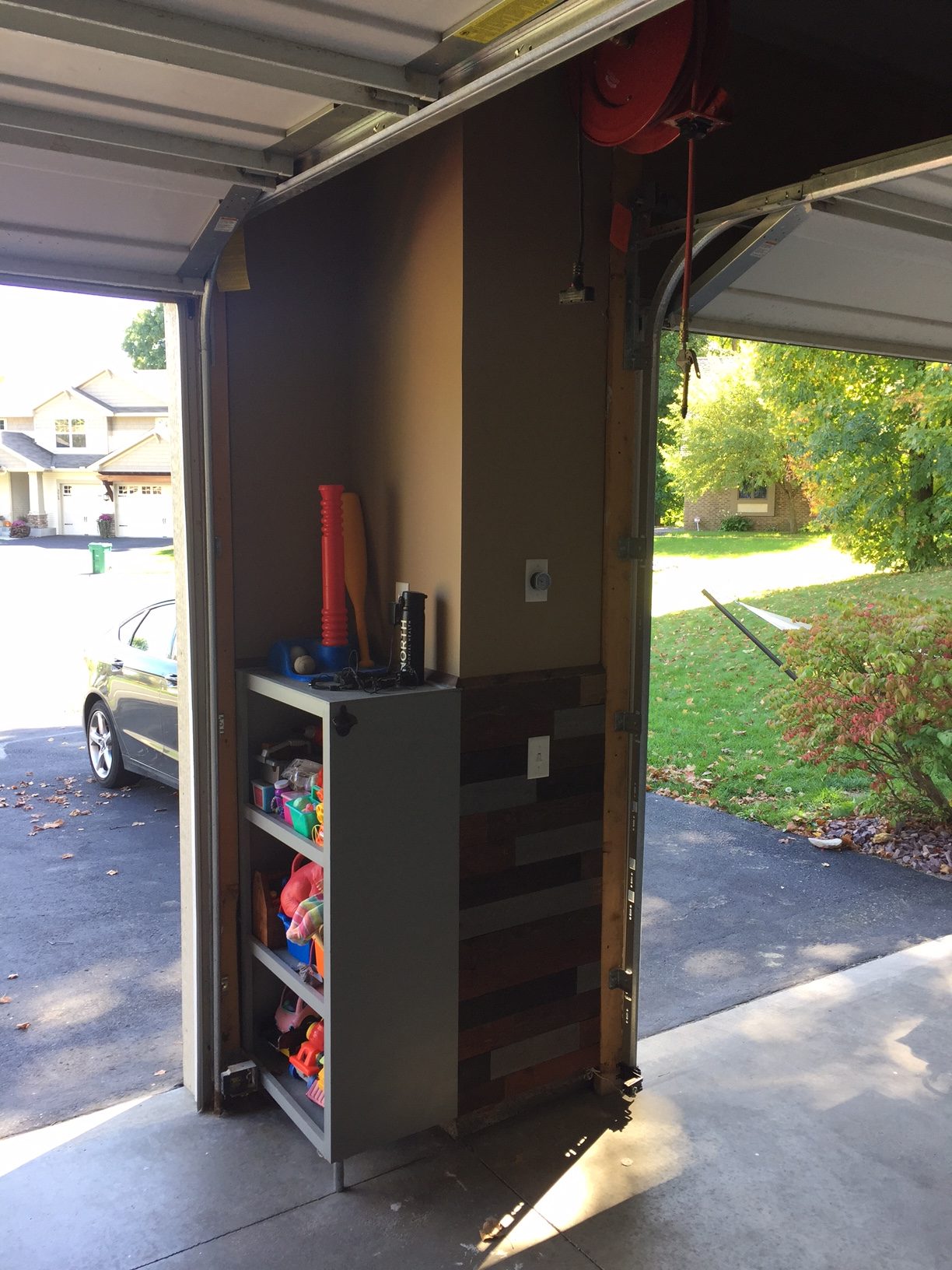 In between the doors we have a cabinet for kids toys.  I figured out after building it that it was also a nice place to set things like my phone and keys so I put an outlet in so I can charge my phone there.  The gauge and the switch in the wall are for the air compressor.  You can see the pull down hose and pull down cord hanging from the ceiling too.

So with that – Im calling this done.  5 months was a long time to work on one thing and I’ll admit at times I got burnt out on it.  Im glad to be done with it.  That being said – there are some things I learned through the process so it was beneficial from that perspective too.  I think with the knowledge I have now – and knowing what to work on when – I could have gotten this done in about half the time.  Oh well.  Lessons learned.  Moving on 🙂