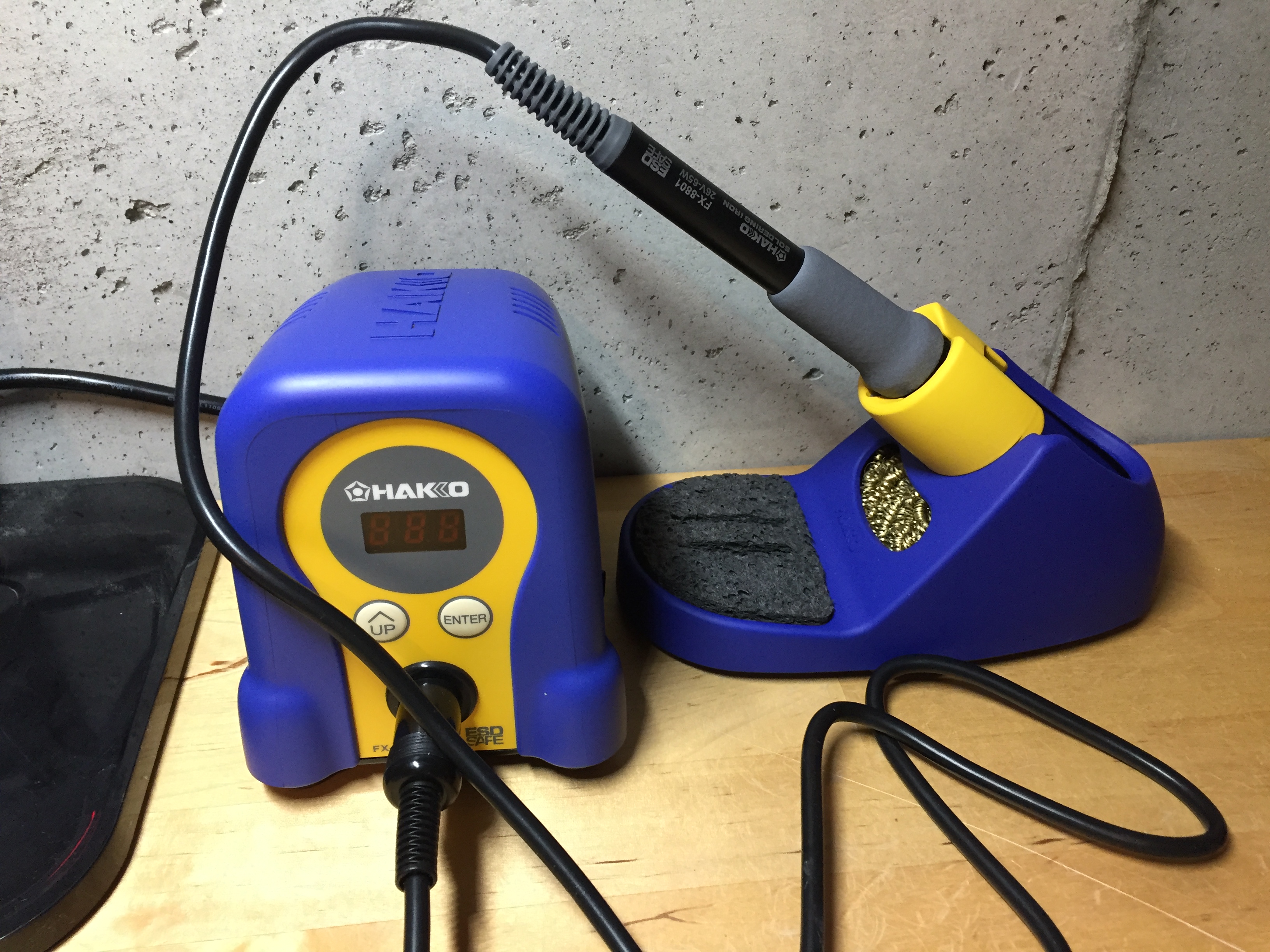 One of the skills I’ve been hoping to pick up this month was soldering.  It’s a skill that I’ve always sort of struggled with.  My previous soldering iron was a cheap RadioShack special.  It took forever to heat up, didn’t deliver constant temperature, and Im pretty sure my lack of knowledge in soldering caused me to destroy the tip early on in it’s life.  So when I knew I’d be doing some soldering, I decided to purchase a new soldering iron.  I went back and forth and back and forth on what iron to get.  After a ton of research, and a recommendation from a friend, I ended up with this Hakko unit.  Some people recommended that I buy a cheap iron and then just replace it when it dies.  I typically prefer to invest more money upfront on a higher quality tool with the hope that it will last me a long time.  My hope is this Hakko unit will last me a long time.  So far Im REALLY impressed with it.  This thing heats up in seconds.  Once the temperature is set the temperature readout flies right up to the set temperature and stays there.  Having a stand is also really nice and something that I didn’t have before.

After purchasing the unit I spent a lot of time reading on how to care for the iron.  There are lots of people with lots of different opinions on how to care for the soldering iron.  The big ticket item for maintenance is the soldering tip.  This is the piece that actually touches the solder which means it gets incredibly hot.  And while the tip is replaceable there are a few things you can do to keep it in good working order for a long time.

Tinning the tip is the process of applying soldering directly to the soldering tip.  This not only protects the tip but also make soldering easier.  Tinning is something that should be done rather frequently when soldering (every few solder joints) and before storing the iron.  I also did it right away with the new iron to help protect it.

When you start your iron the first time there should be solder on it from when you tinned it before storage.  Let this heat up and then clean it off.  Now this is where people really seem to disagree.  Some say that you should clean the tip on a wet sponge.  Other says this is an awful idea and that you should use a brass wire mesh sponge to clean the tip.  They argue that the wet sponge can cause temperature shock and cause the tip to fail early.  This makes sense to me and I do find that the brass wire mesh seems to be more effective.  I like to clean the tip pretty frequently to prevent any buildup from occurring.

Turn off the iron when you aren’t using it

This seems obvious but it’s not something I had ever done before.  I typically plugged the iron and just let it sit there until I was done.  This was mostly out of laziness since the iron took so much time to heat up.  The longer the iron sits at the high temp without being used, the better chance it has to burn the tip.  Burned tips are bad.  Very bad.

So…. I decided to start my soldering adventure in reverse.  Rather than solder a bunch of new things, I decided to try and desolder things with the hope that I could then once again solder them for practice.   The best part?  I have a pile of dead electronics in my basement waiting to go into a dumpster.  Lots of circuit boards to practice on! This was a good idea, had it worked… 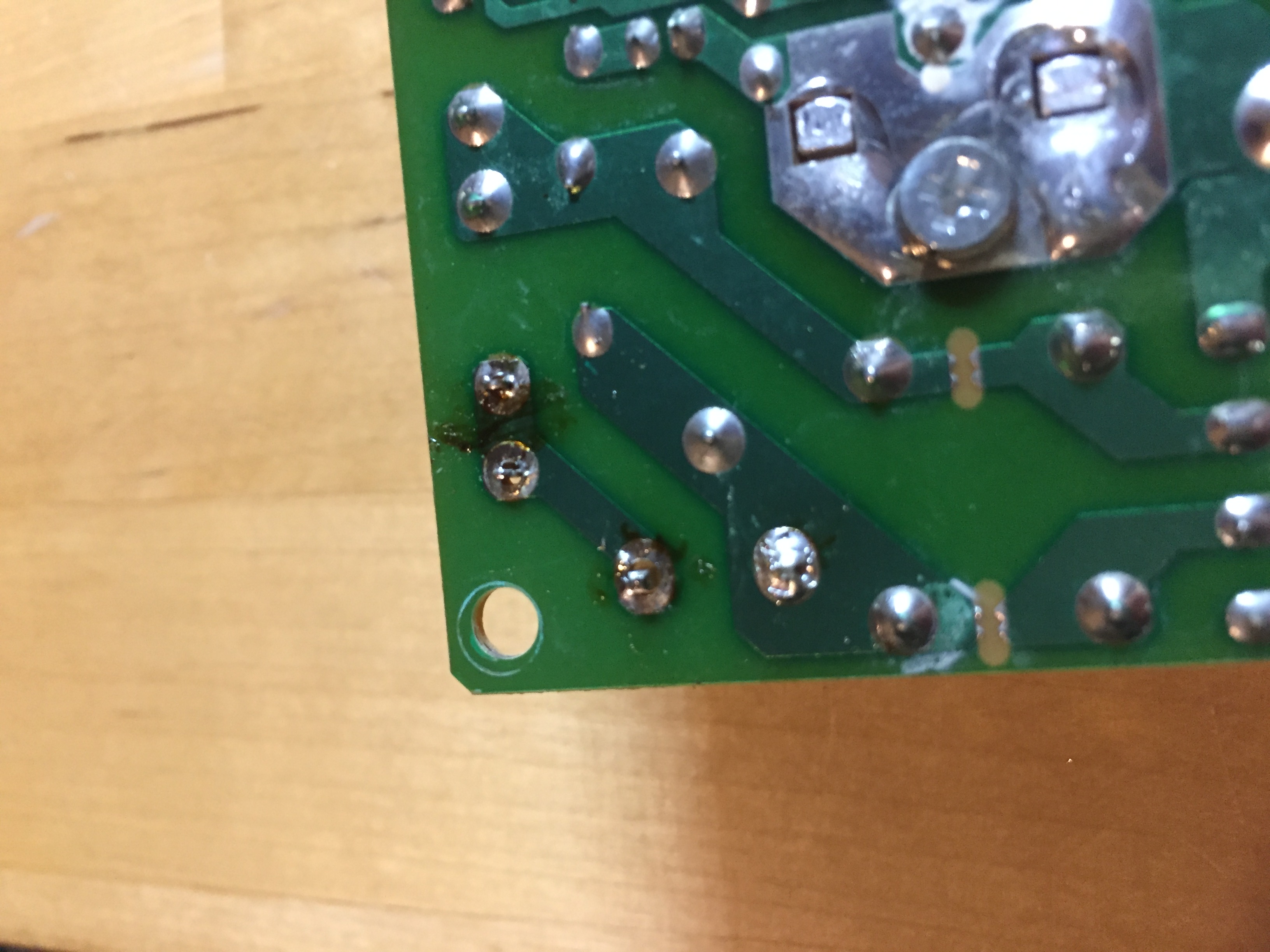 Here is my first attempt at desoldering.  It went…. ok.  Like everything else – there are lots of opinions on how you should desolder things.  The desoldering process seemed to fall into two main categories – copper braid and solder suckers.  When I was making my parts list for this month I initially had both items on my list.  Then I decided to just go with the copper braid since it seemed like it might work better.  The copper braid looks like this… 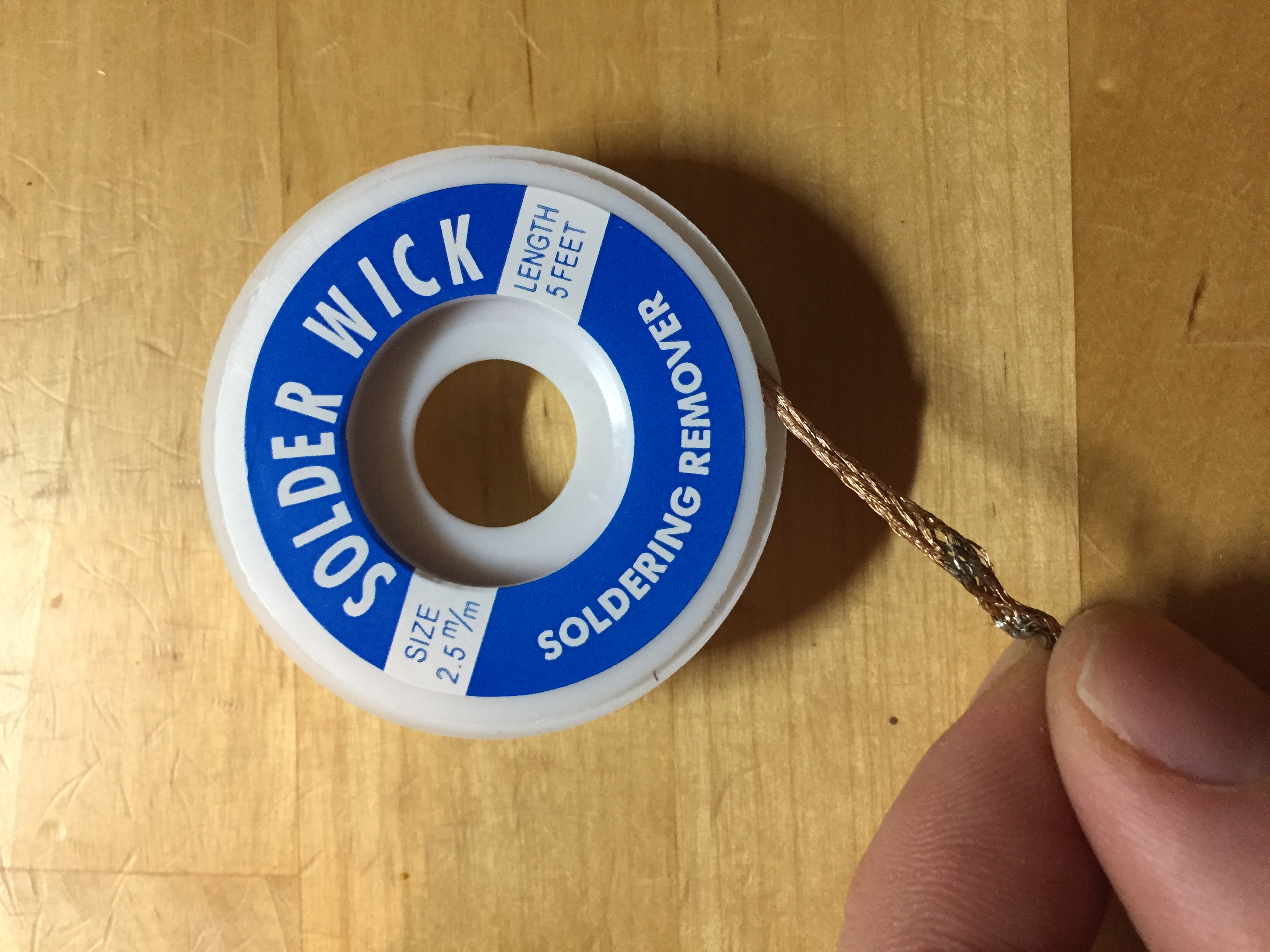 The idea is that once the solder is hot, the braid can soak up the solder.  Many people seem to have great success with this by laying the braid across the top of the solder joint and then heating the joint up by pacing the iron on top of the braid.  My results were… meh.  Im sure a lot of it is technique and practice but I wasn’t successful in fully removing the solder from any of the joints I tried.  I also wonder if some of the joints I was trying to desolder were older solder of a different type that might just be hard in general to desolder.  So more practice will be needed but needless to say my first night of soldering didn’t go how I had planned.  More practice needed.