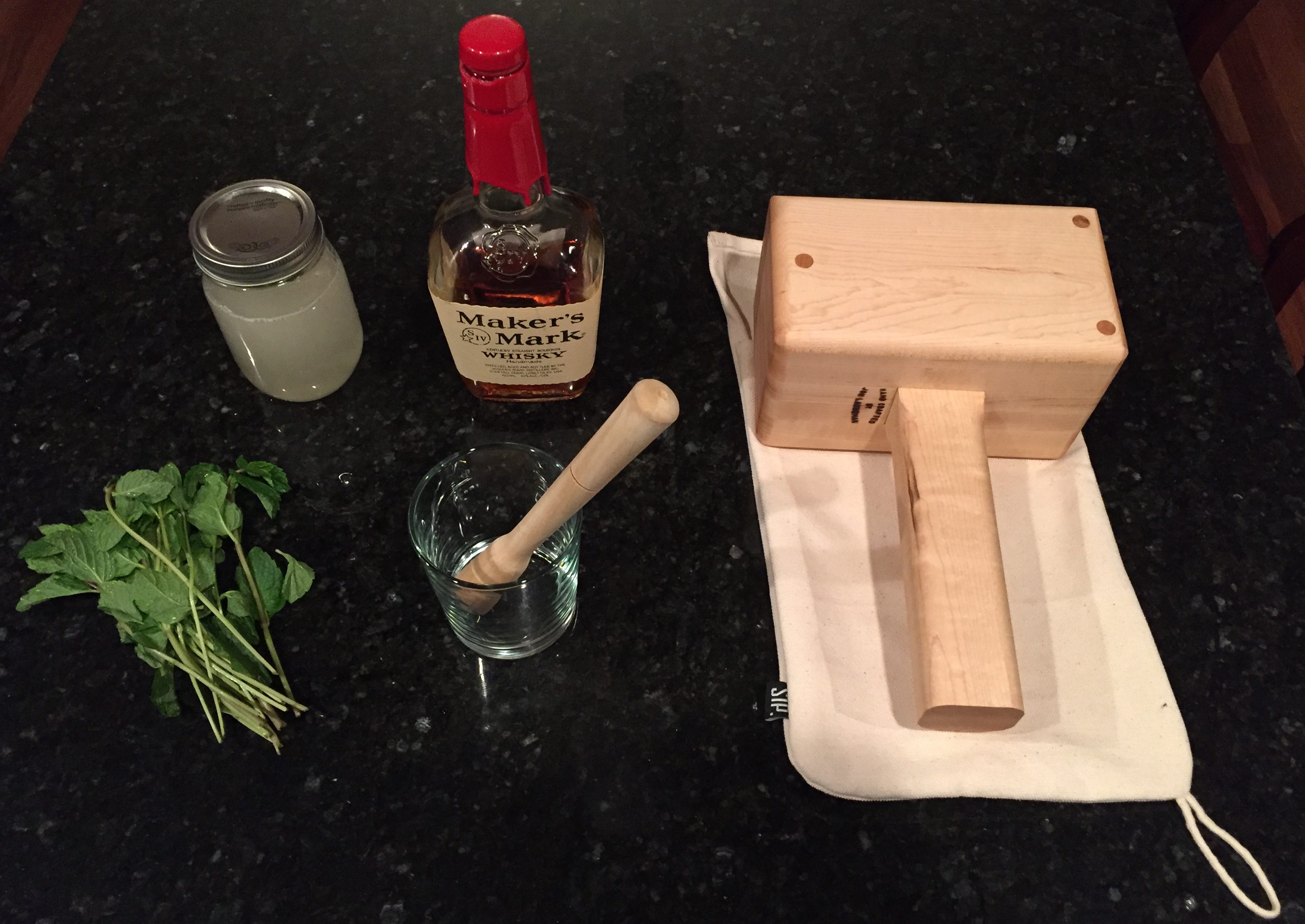 Ah yes – the mint julep.  A drink that when made properly can’t be beat on a hot summer day.  Made poorly and it tastes like someone put bourbon and lettuce in a blender and then froze it.  Well – maybe not that…. but they do taste awful when not made properly.  What’s baffling is that there are only 4 ingredients (including the ice) in the drink so you might wonder how people screw it up.  Turns out there are lots of ways to screw it up and even more variations on how to make it.

Try this out sometime.  Go to a fancy bar (you know one where the bartender is wearing a bowtie) and ask them how to make a mint julep.  I guarantee you that bar tender will tell you with conviction how one is made.  Then ask if they’re sure because you thought it was made differently.  Prepare to be glared at.  The milt julep (much like an old fashioned) is a drink that people are passionate about.  Faces have been slapped, wars have been fought, and arms broken over the correct way to make a mint julep (none of that’s true (or is it)).  People are serious about it.  One of my favorite quotes I heard about the mint julep was from Irvin S. Cobb when discussing his friends choice to use rye rather than bourbon in the mint julep…

“Any guy who’d put rye in a mint julep and crush the leaves, would put scorpions in a baby’s bed”

Yikes.  He also mentions crushing the leaves which is another big no no when making the mint julep.  Alright – enough banter – let’s get to it.  We’re going to need the following items…

So before we start the drink, a quick word on simple syrup.  Simple syrup is equal parts sugar and water.  I had always made mine on the stove by heating up the water and stirring in the sugar.  What a waste of time.  My sister and brother-in-law were recently at my house and convinced me of the merits of making simple syrup in a jar. 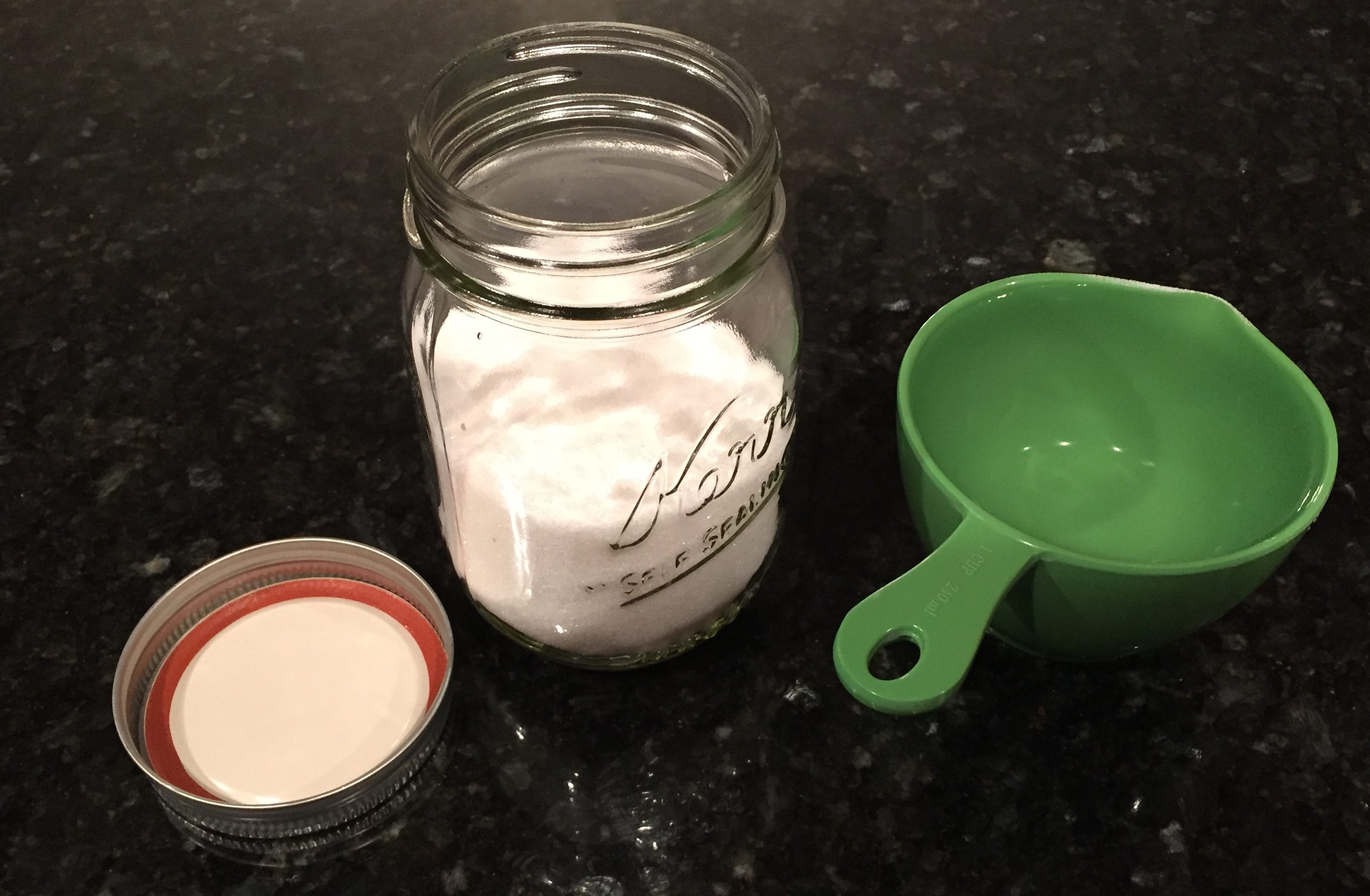 I use a canning jar to make sure I have a tight seal.  Combine the water and the sugar and shake the dickens out of it for at least two minutes.  When you’re done you’ll have a cloudy looking liquid… 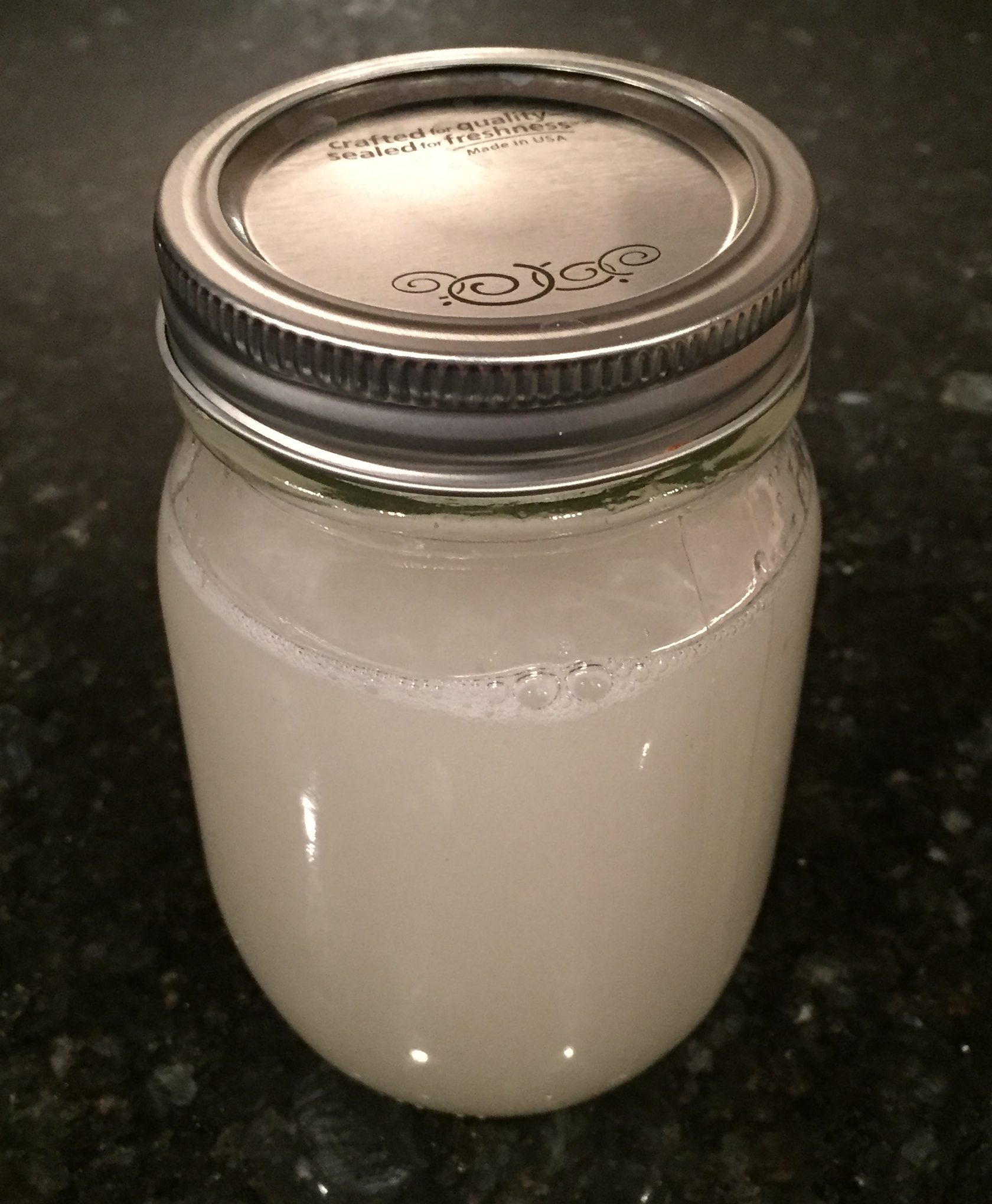 If allowed to sit for a while you’d find that it would turn clear just like normal simple syrup.  You don’t have to wait for that to happen to use it though.

Alright – so now we have all the stuff we need.  The first thing you need to do is put some mint leaves in the glass.  You’re going to put all of the leaves (just the leaves not the stem!) from the 4 sprigs in with the exception of one of of the sprigs.  On the last sprig, strip all the lower leaves off but leave some on the top and set that side. 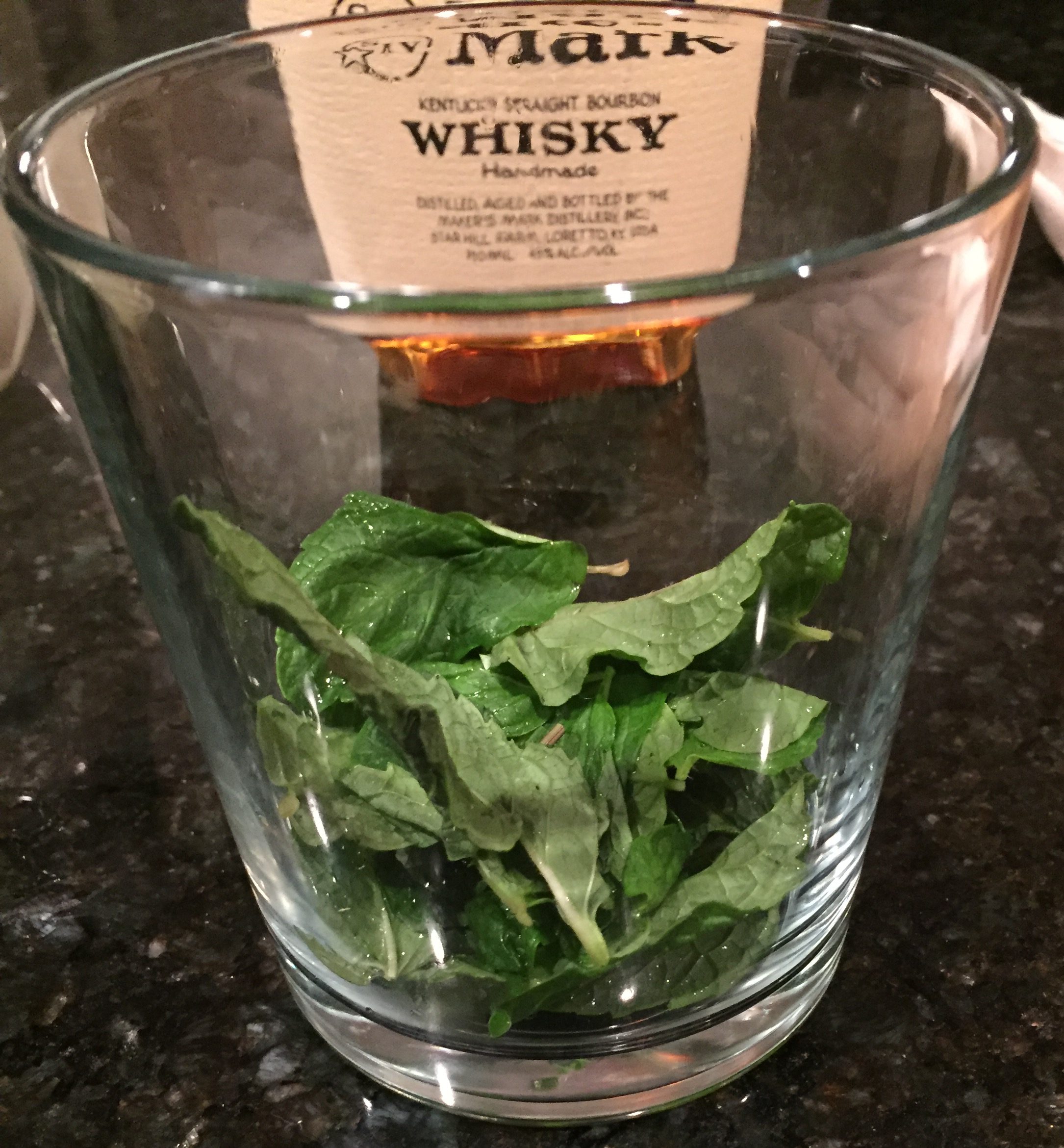 Next we’re going to add some simple syrup to the glass.  Most people say about a half an ounce.  I prefer slightly more.  Once you have the simple syrup in you’re going to perform what’s commonly called ‘dobbering’.  It’s the process of softly muddling the mint leaves. 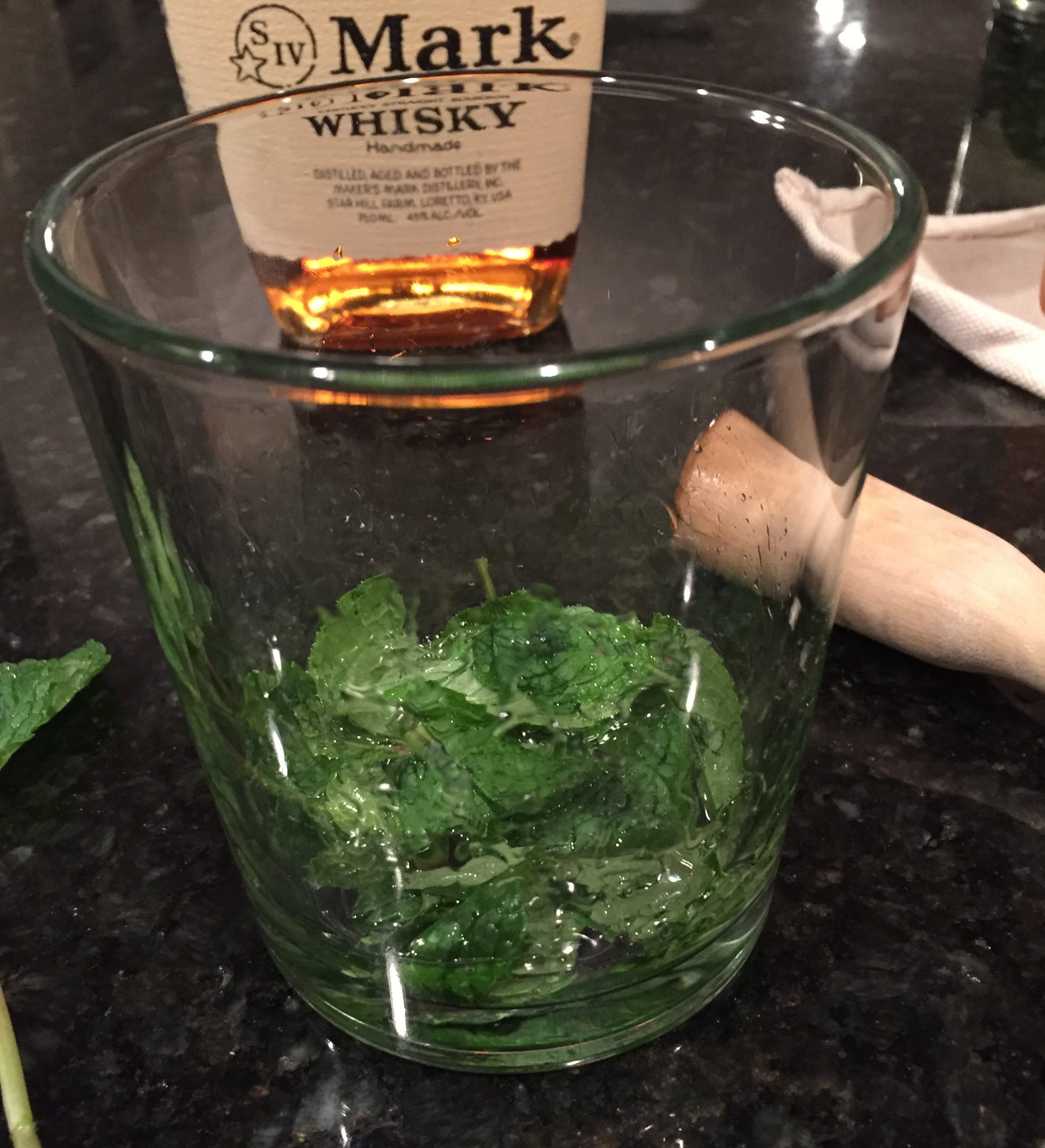 Ok – I made the word dobbering up.  But it sounds good doesn’t it?  The point is that you want to softly muddle the leaves to make a sort of mint flavored syrup with the simple syrup.  The picture above shows the mint after the dobbering (ok I’ll stop) is complete.  You can see that the mint still looks to be in pretty good shape but you can also see that some of the leaves look much darker in places.  If you over muddle the drink will taste and look awful.  Don’t do it.  Or maybe do it just once so you know the horror. 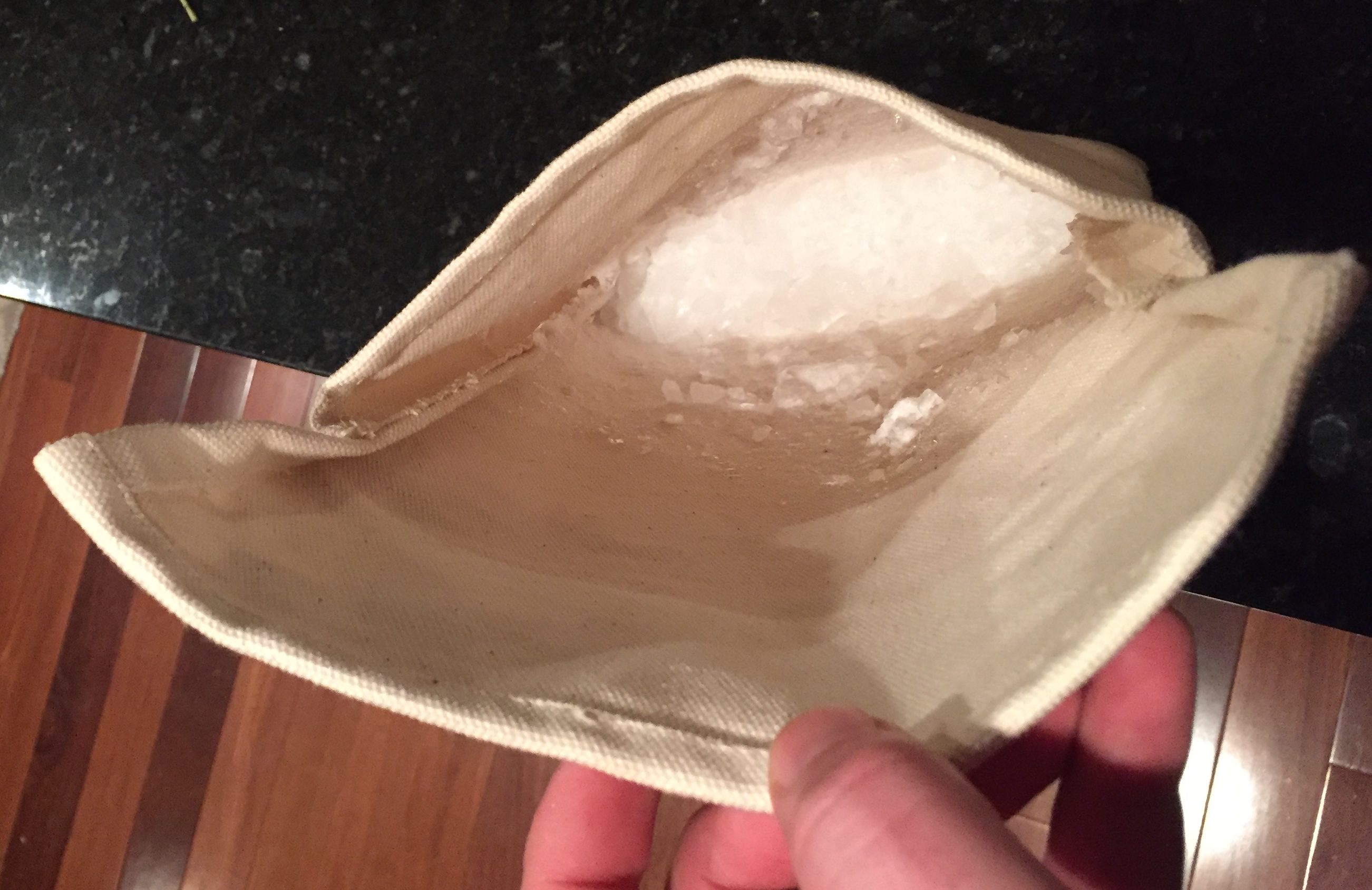 Next we’re going to need some crushed ice.  Put some ice in your lewis bad and hit it with the hammer over and over again.  How crushed the ice is supposed to be is another part of the debate.  I prefer it rather small.  Others prefer it a little bit chunkier.  A couple of tips here though.  You want dry ice.  The lewis bag works wonders for this as the canvas wicks away the moisture from the ice.  When you take ice out of the bag, use an ice scoop or just dump it in.  Handling the ice by hand will causes it to start melting again.  I know, that’s being weird, but it’s a thing. 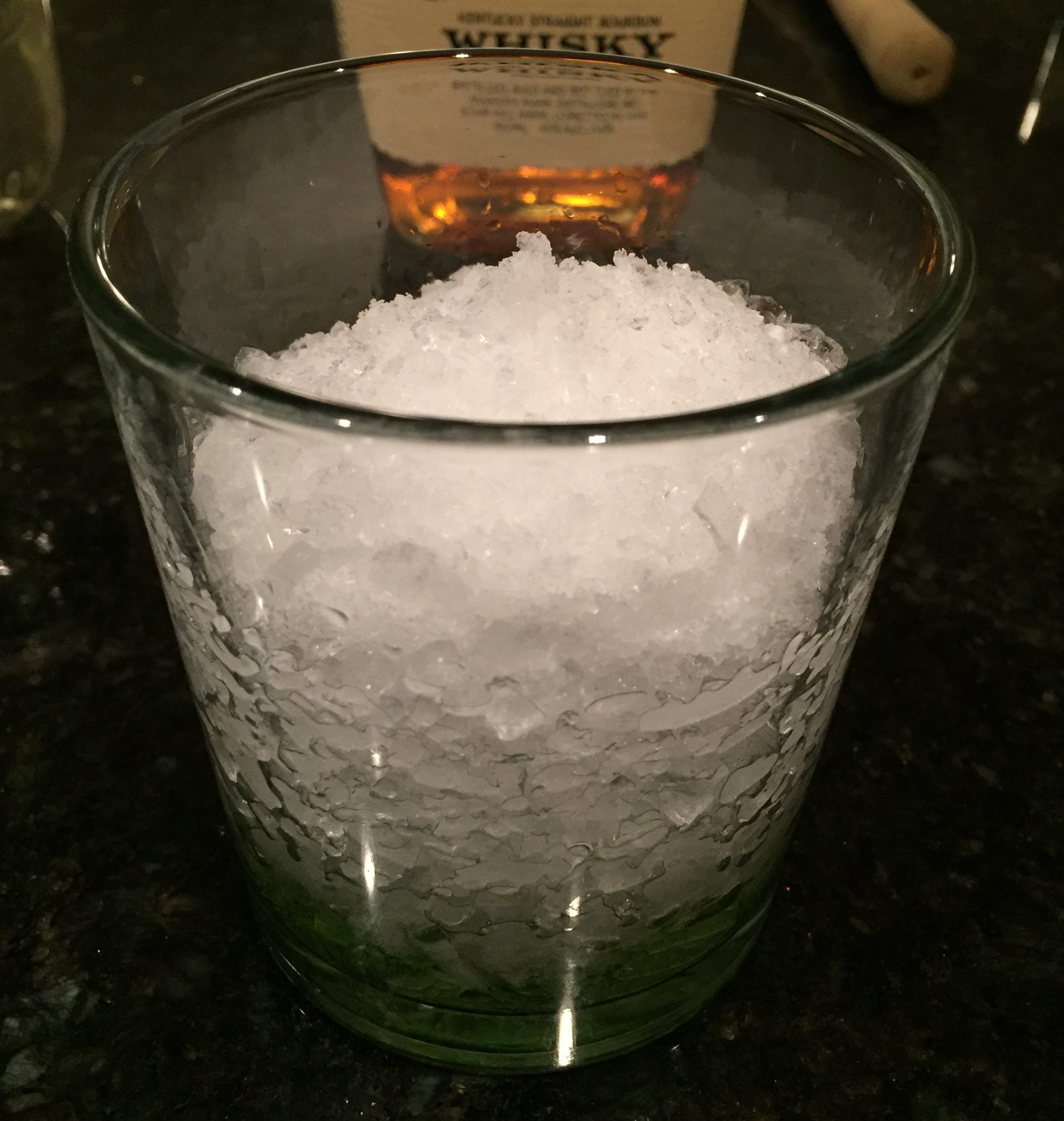 Fill the glass almost completely with ice.  Now add the bourbon.  Most people agree the magic number is two and half ounces of bourbon.  Let’s pretend that’s how much I put in. 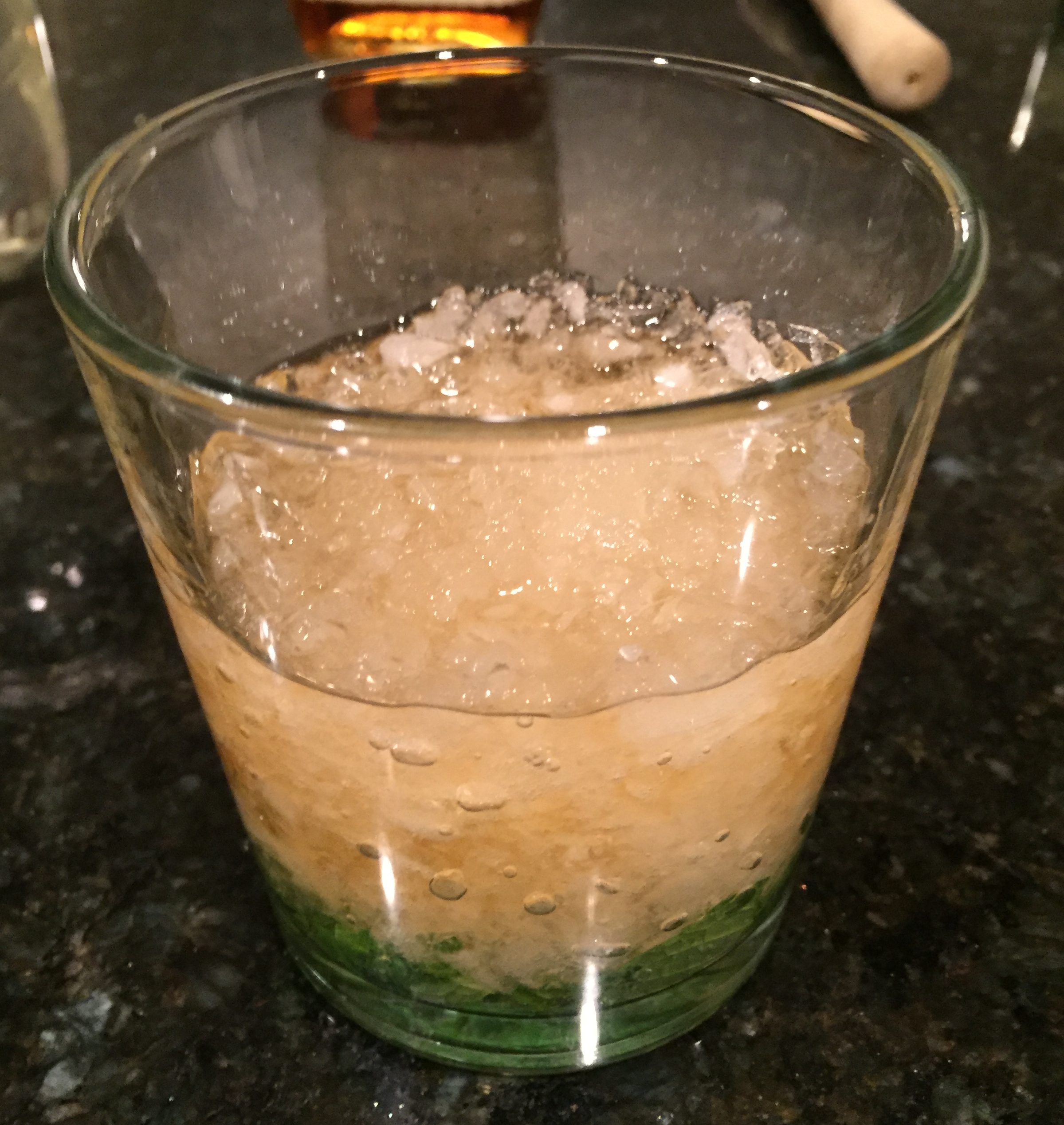 Now give the drink a quick stir with a straw or stirring stick.  The goal here is to keep the mint on the bottom, but to cool the bourbon quickly.  After the stirring top the drink off with more ice almost to the top of the glass.  Now this next part is super important. 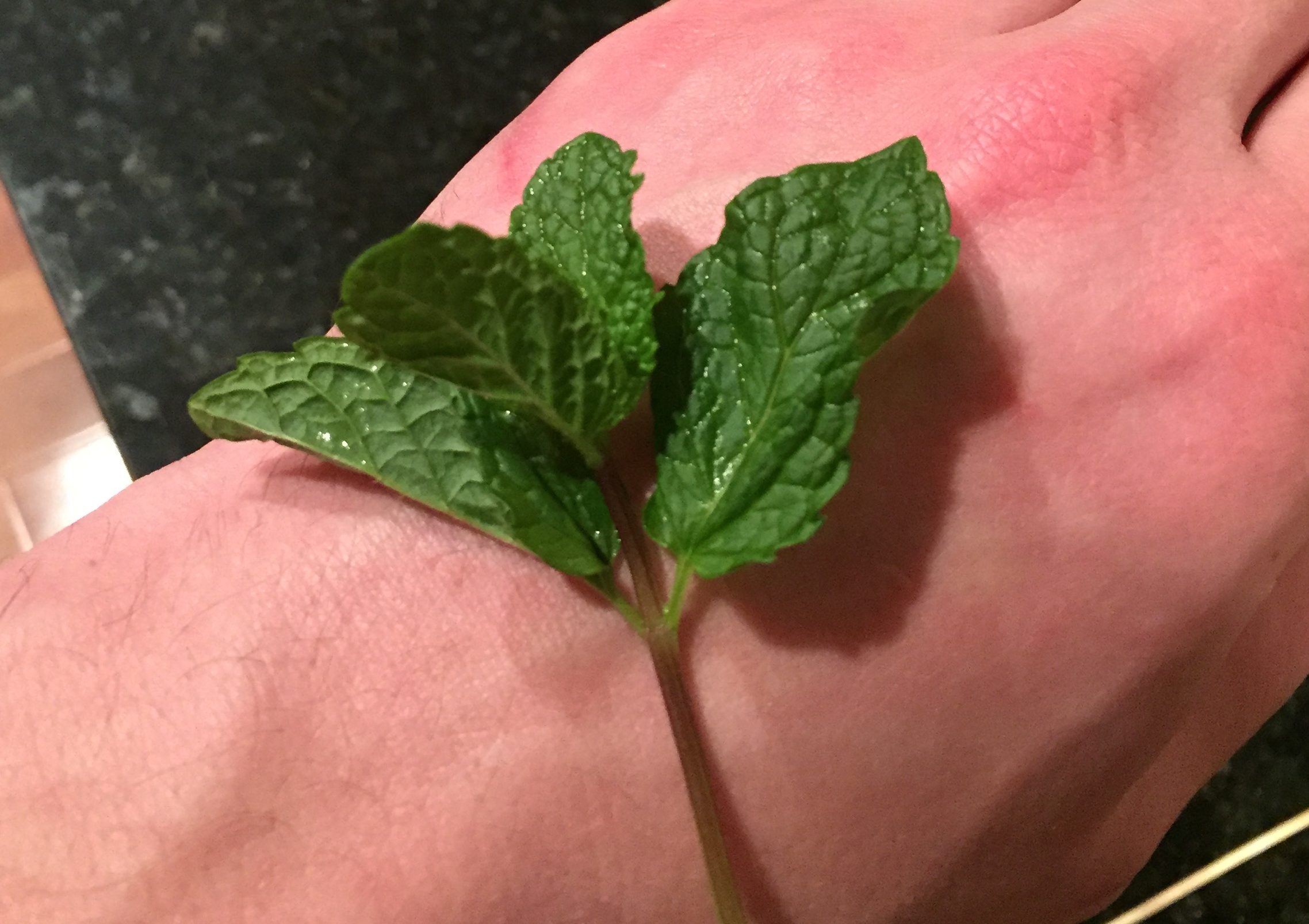 Place the sprig of mint you saved on the top of your hand.  Now use your other hand and slap the mint.  That’s right.  Slap it. 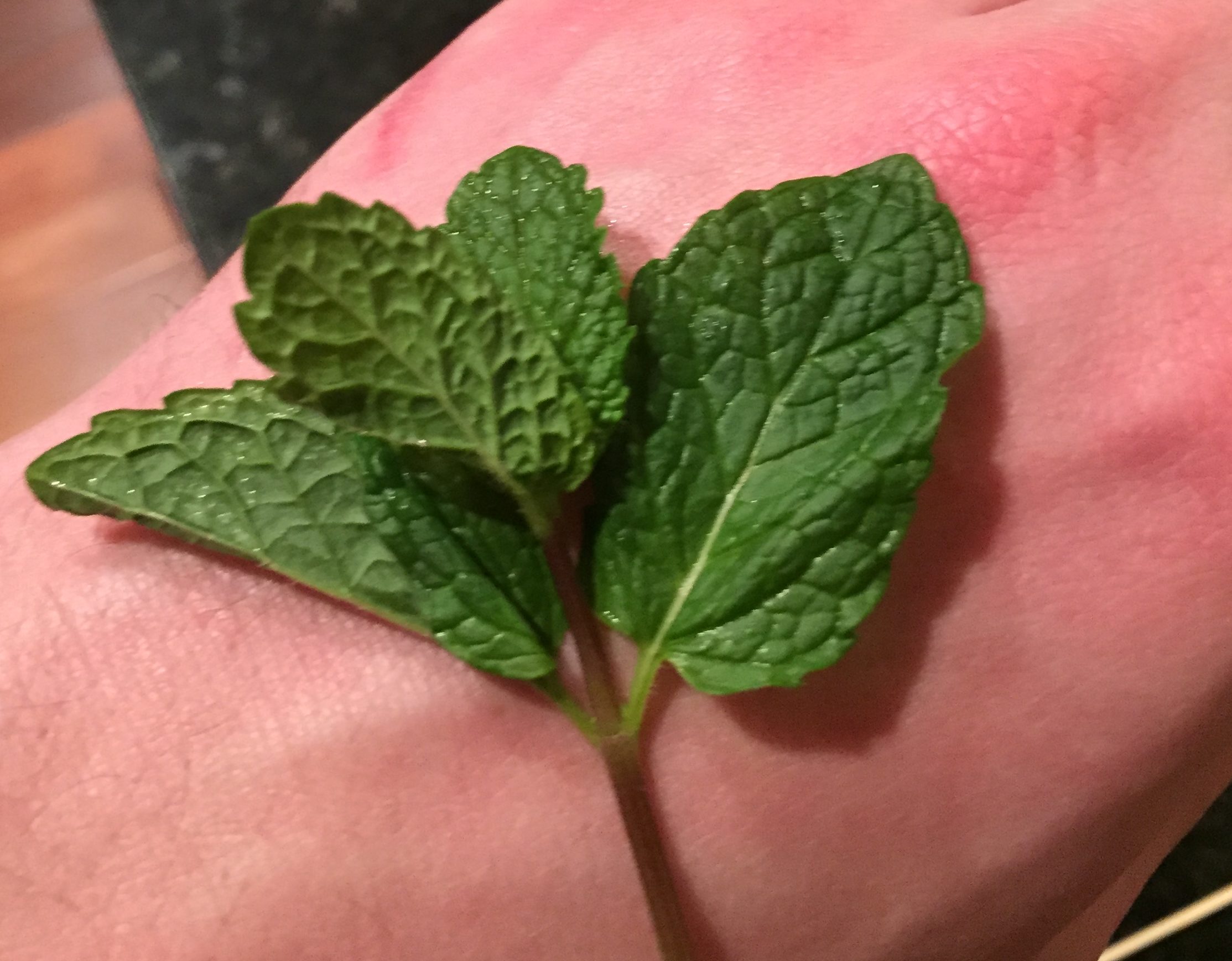 Can you tell the difference?  I sure can.  I mean – it’s like flat now.  As with dobbering (no, really, Im done now) the key to using mint is to not abuse it.  Hitting the mint like this releases the mint oil that smells so good.  The more you crush the mint the more bitter the mint will become.  So only a gentle slap please.  Now make a hole in the ice and stick the mint sprig in there. 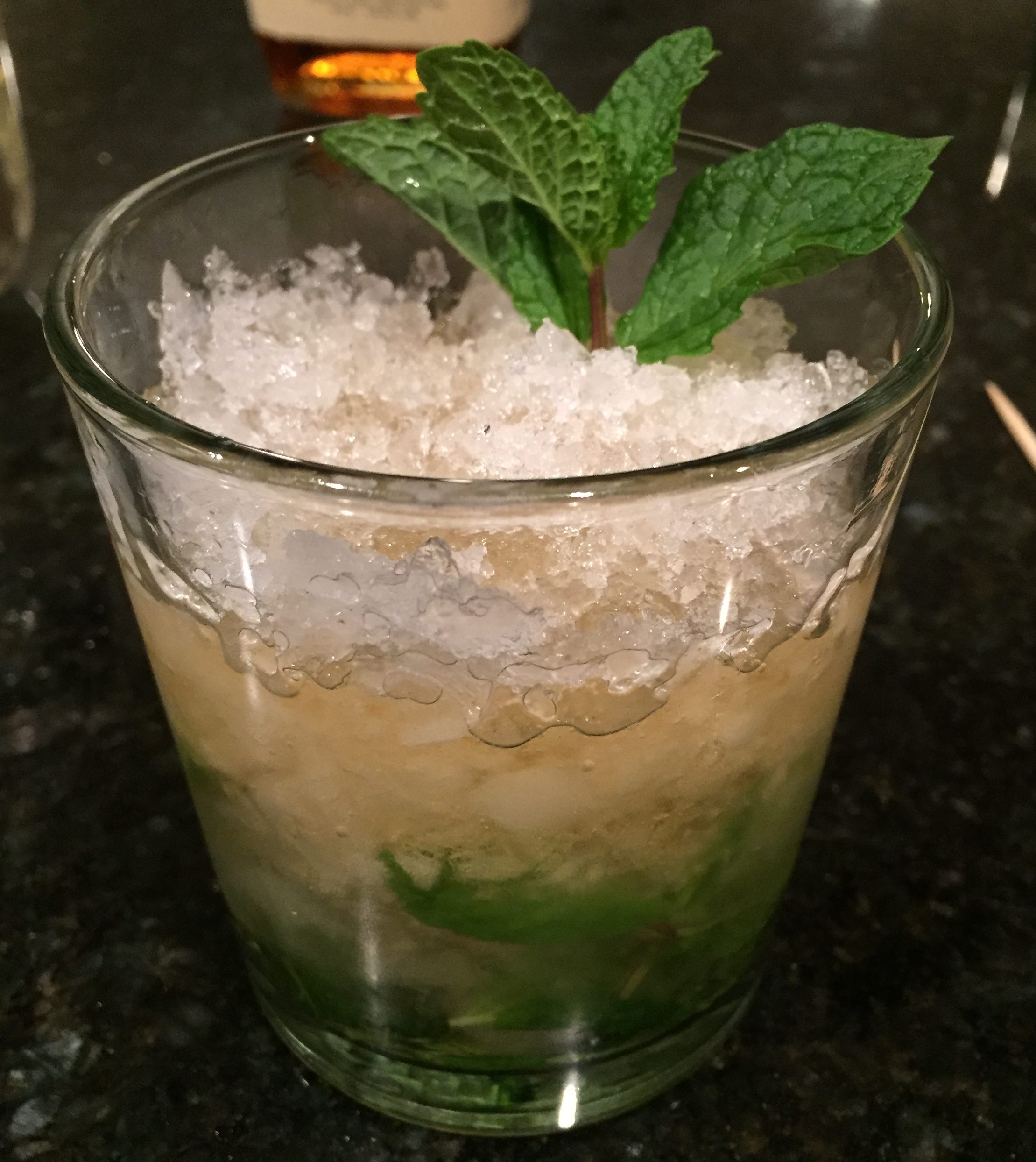 If made properly, after a couple of minutes you should see frost forming on the outside of the glass.  This frost would form much more quickly on a silver cup but I say anyway you can get it counts. 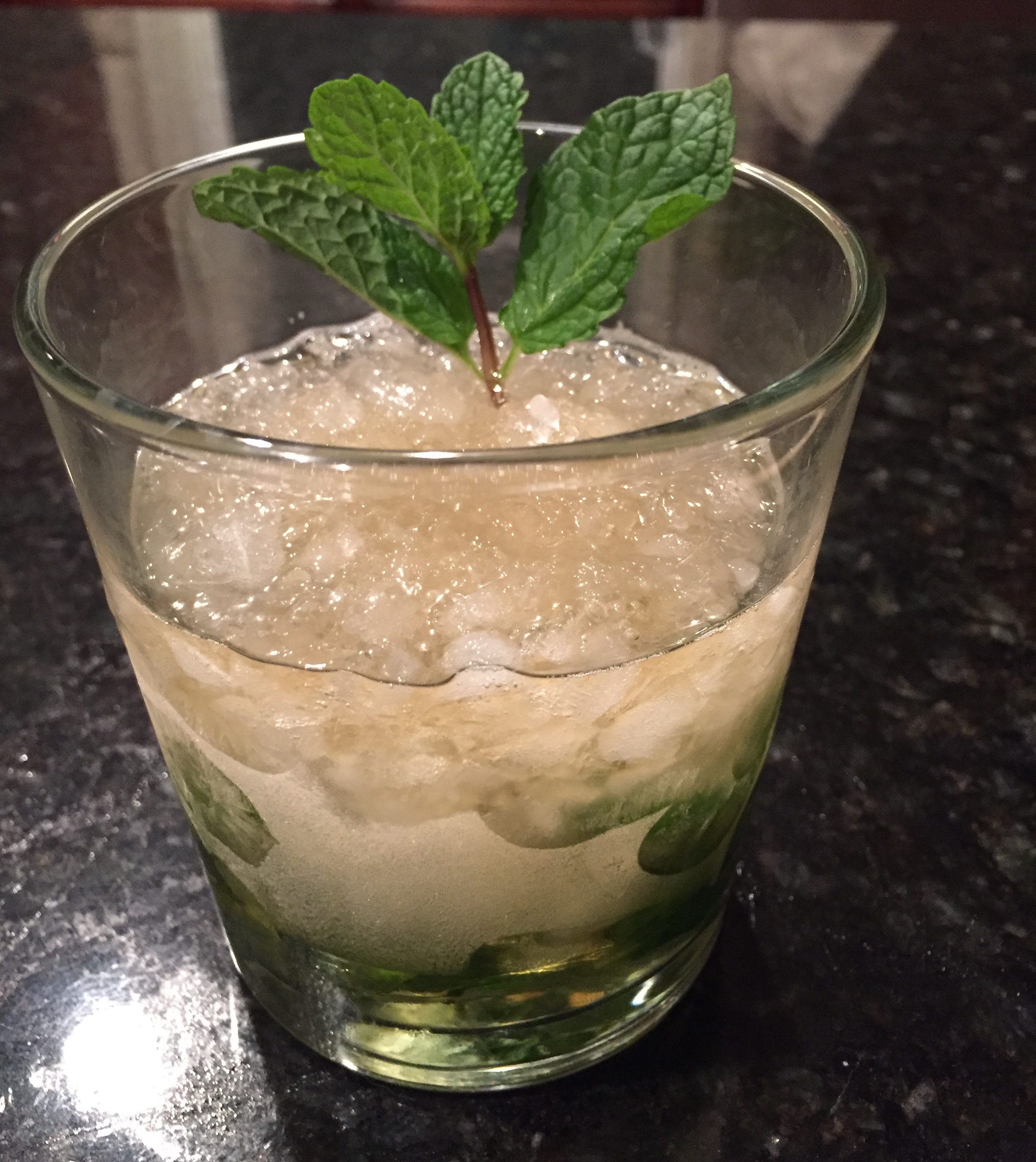 And there you have it – the mint julep.