It’s now time to talk about my least favorite kind of whiskey.  Scotch.  People reading this will likely insist on calling me crazy for saying that.  Im ok with that.  I just honestly don’t care for the taste.  Put another way, I haven’t had a ton of it, but I’ve also never had one I cared for.  I was surprised to find that I had a bottle of Scotch at all (I had to dust it off to take the picture).  Someone must have mistakingly given this to me as a present years ago (and someone must be drinking it).  That being said, it is a popular kind of whiskey (I should be calling it whisky but it’s hard to teach an old dog new tricks) and one that deserves being talked about just like the rest of them.  This post is going to wrap up our discussions on types of whiskey.  There are other kinds (grain etc) but they aren’t distinct enough in my opinion to be talked about on their own as they’re usually used in blending.

So what is Scotch?  Well – to tell you the truth, it’s a lot like Irish Whiskey.  Many people will claim that Scotch is distilled twice and Irish whiskey three times.  We talked about how that’s not a rule anymore in my last post on Irish whiskey.  The only real differences between Scotch and Irish whiskey are where it’s made and how the malted barley is dried.

The second big difference is how the malted barley is dried.  The malted barley has to be dried to halt the germination process of the barley.  In most whiskeys, this is done in a kiln with dry heat.  In Scotland they use peat fires to dry the malt which imparts a strong smoke flavor into the barley.  This is why most Scotch is described as smokey in flavor.  The picture below shows the kind of smoke that comes off the peat fires. 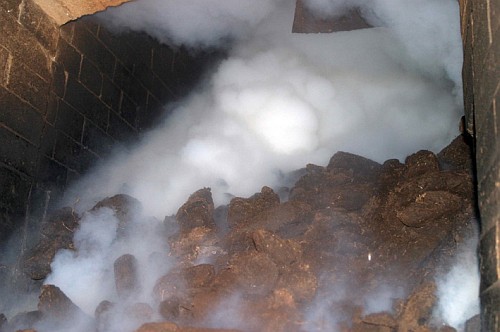 Like Irish whiskey, there are different varieties of Scotch whiskey.  The definitions are mostly the same…

So there you have it.  I’ll likely give Scotch another try here this month to see if my taste for it has changed but it seems unlikely.