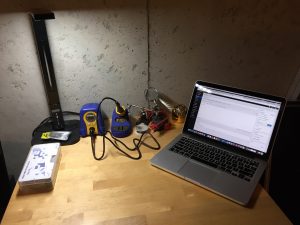 So this is it – month 1 of doing things.  I had to start somewhere and I decided that somewhere would be electronics.  I’ve always been fascinated with electronics (I work in the IT space) but I’ve never taken the time to actually sit down and learn it.  So here’s my chance.

To get ready for this month I did a little prep work.  Namely, I reached out to some friends of mine who do this kind of thing and asked the question “where do I start?”.  I got a wide variety of answers.  Some encouraged me to start with the bare basics – to stay away from things like Arduino until I understood basic electrical theory and components.  Others suggested to jump right into it and buy an Arduino and try tackling a project.  So I decided to land somewhere in the middle.  One of my pet peeves is working on higher level things without understanding the basics.  On the other hand – I have a month to decide is this is something I want to continue with as a hobby.  So to cover some of the basics – I bought a book called ‘Make Electronics‘.  Truthfully, some of it seems too basic for me as I understand some of the basic concepts – on the other hand, it never hurts to confirm Im on the right page.   The book is a learn by example kind of resource but I struggled to find all of the parts for each lab and I eventually gave up on it.  Rather, I think I’ll read the book and then dig in further to specific areas I don’t quite grasp.  Since Im hoping that will provide some of the basics I also decided to tackle some Arduino type work.  My thought is that I can find a coupe of ‘how to’ labs on the internets, get those working, and then dive into the ‘how is this working’.   Is that getting ahead of myself?   Is that the right approach to learning?  Not sure – but again, I at least wanted to order some of this stuff ahead of time to make sure that I had it when I needed it.

So what did I buy to prep for this month?  Well, I had an entire list of things which I then scaled back on significantly since I didnt want to get too far ahead of myself and buy things I didnt actually need.  The picture above includes everything I purchased to get started with the exception of a couple of smaller items that Im still waiting on from Amazon.  I’ve set my self up on an old wooden desk in my basement  It’s not super ideal, but I felt the need to have a dedicated space rather than trying to do this type of thing in area that is already used for other purposes daily.  The components on the desk include…

Specifically a Hakko FX888D.  Previous to this month I had a cheap handheld iron that I bought at RadioShack many many years ago.  It was in rough shape, and I never had much luck with making what I’d consider to be great solder joints.  After doing a lot of research I settled on either the Hakko or Weller brands.  I couldnt quite justify the extra cost for the Weller and I’ve heard great things about the Hakko.  Needless to say I’ve never used a station this nice so I assume there will be a few posts this month about things like ‘how to solder blah blah’.

While I had some solder from RadioShack sitting in my tool box I’ve heard people do nothing but rave about Kester solder.  Apparently the quality of the solder can make a big difference in how the joint turns out.  Since Im starting out from scratch ,and dont want to get confused about whats going wrong if I run into issues, I figured I’d start with some I knew was good.

Another recommendation and something I have no experience with.  A soldering wick seems to be used to suck up solder when you are trying to remove it.

I had no idea you even used flux when you did electronics soldering.  Apparently its a thing so I ended up getting some.

I’ve had this for awhile and used it on and off when needed.  Admittedly, I usually need to look up how to do whatever I need to do.  That being said Im looking forward to becoming more comfortable with this tool this month.

Another tool I’ve had for awhile and used when needed.  Namely when I needed to solder something in place and didnt have a free hand to hold it.

Instead of buying a bunch of individual components I decided to start with a parts kit.  This one was recommended to me and seems to have a lot of common parts that could be used on various projects.  What do all these parts do?  Beats me, but I intend to find out this month.

Another recommendation from a friend as a good place to get started with micro-controllers (to be clear, I think that’s what these are called, I honestly don’t know).  This module seems to be more than the base ESP8266 and actually has a USB port on it which I believe to be used for programming the device and powering it.  There seemed to be a lot of good labs out there around this module so I figured it would be a good place to start.  Plus is was like $8, so if I fry it I can get a replacement pretty reasonably.

Not sure if this is a great work lamp or not but its one I had sitting around so it’s what Im going to use.

So there you have it.  This is where Im starting.  I plan on spending some time tonight working through the Make Electronics book.  I expect I’ll post some notes or thoughts on that along the way.  I’m also going to start going through the parts kit and identifying the different components and what they’re used for.