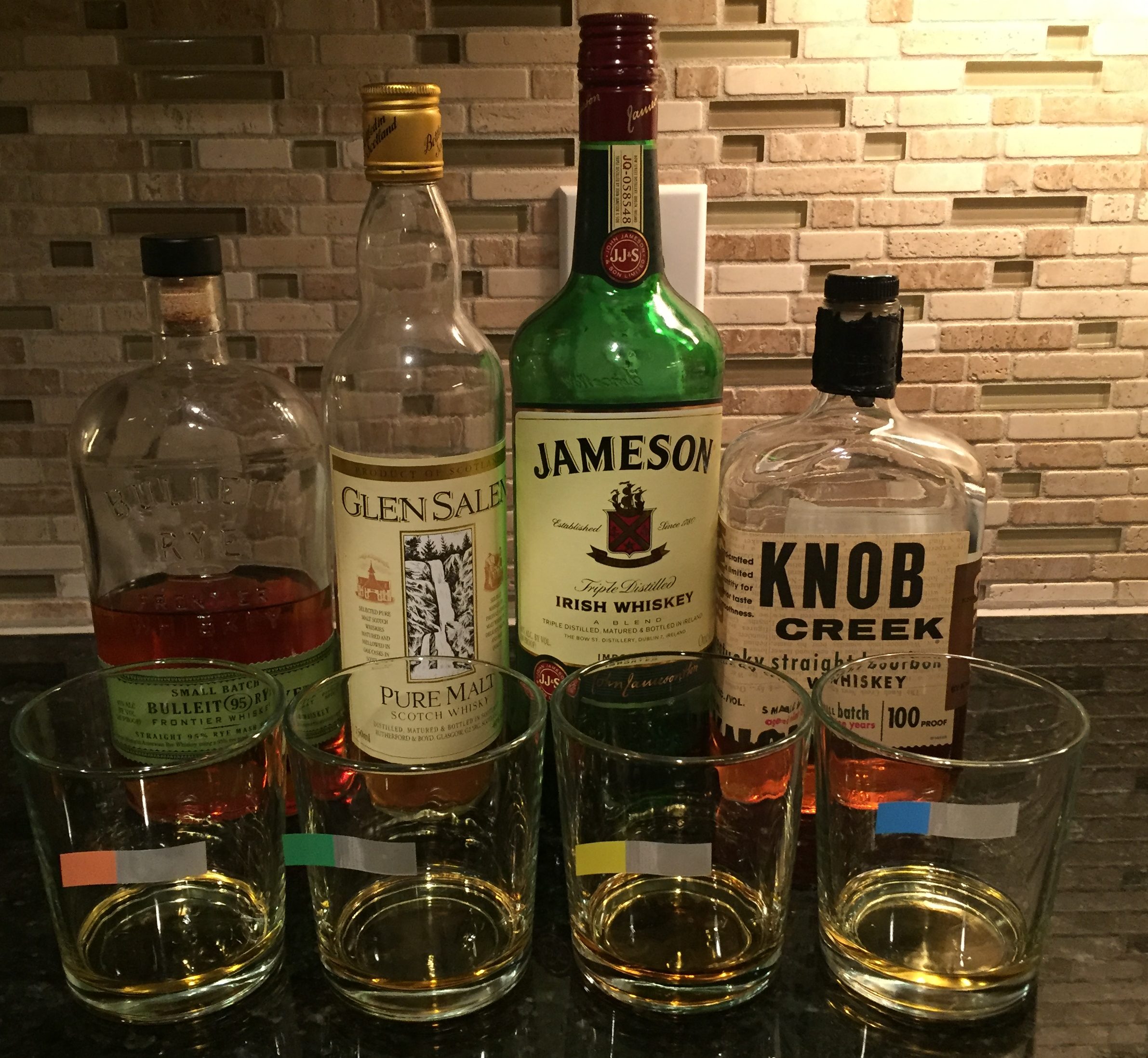 So I’ve been spending all month learning about whiskey and I feel like at this point I have a pretty good handle on at least 4 types of whiskey.  I’ve spent time reading about bourbon, rye, Irish whiskey, and scotch and have learned a lot about how each is made.  So what would be better than a blind taste test?  To do this, I poured a half an ounce of each kind of whiskey in a glass and then had my lovely assistant (who probably thinks Im crazy) rearrange them and put colored labels on each so afterwards I can see how close I was.  So let’s get right into it!

Im going to rate each of the whiskeys based on color, smell, and taste.  Let’s run through each one to see what I come up with.

The first thing I looked at was the color of each whiskey.  I took a couple of pictures so you could see what I was looking at. 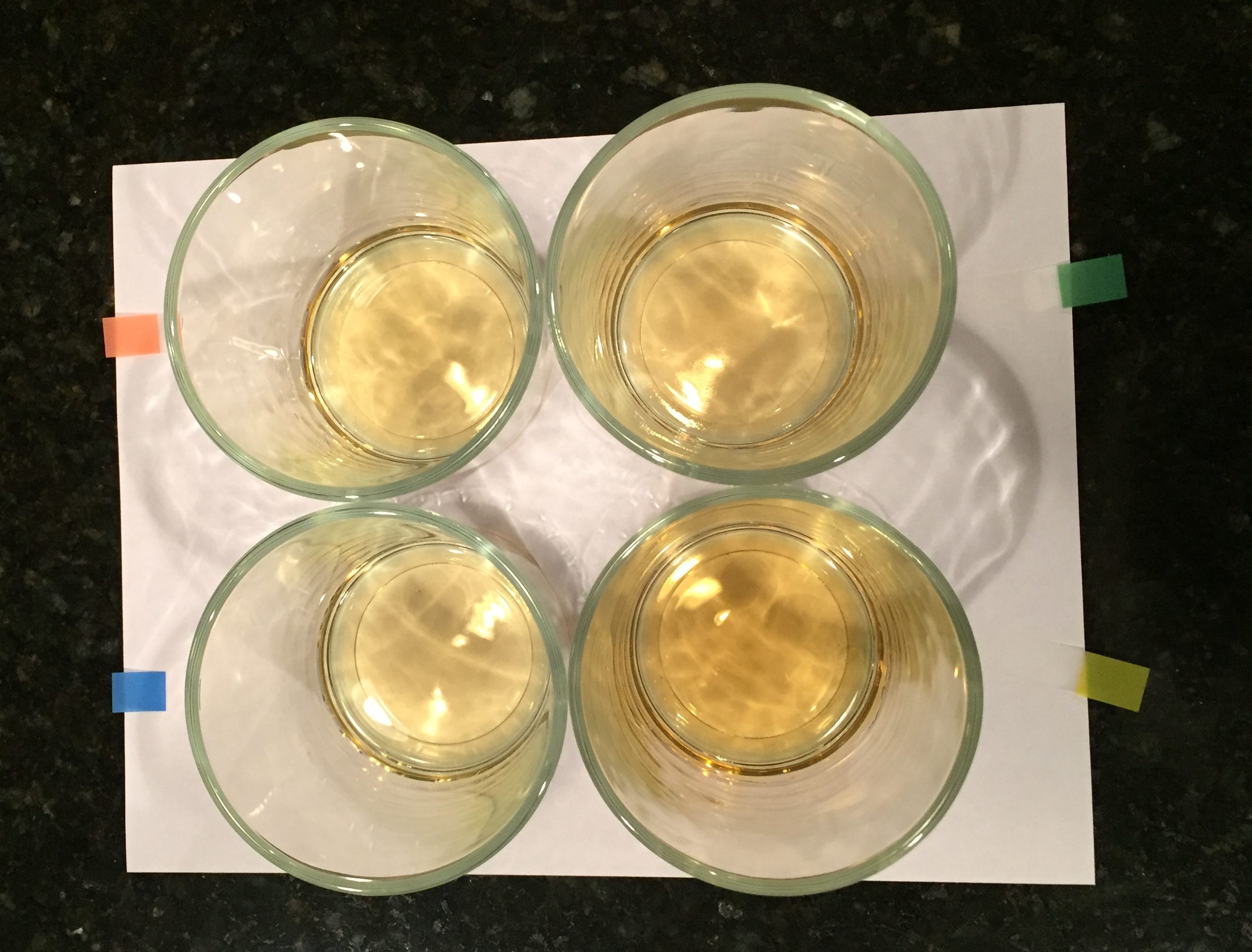 The fact that I had only half an ounce in each glass makes this test a little harder.  But you are still able to see a slight difference in color.  Looking at a different angle it’s easier to see some differences as well… 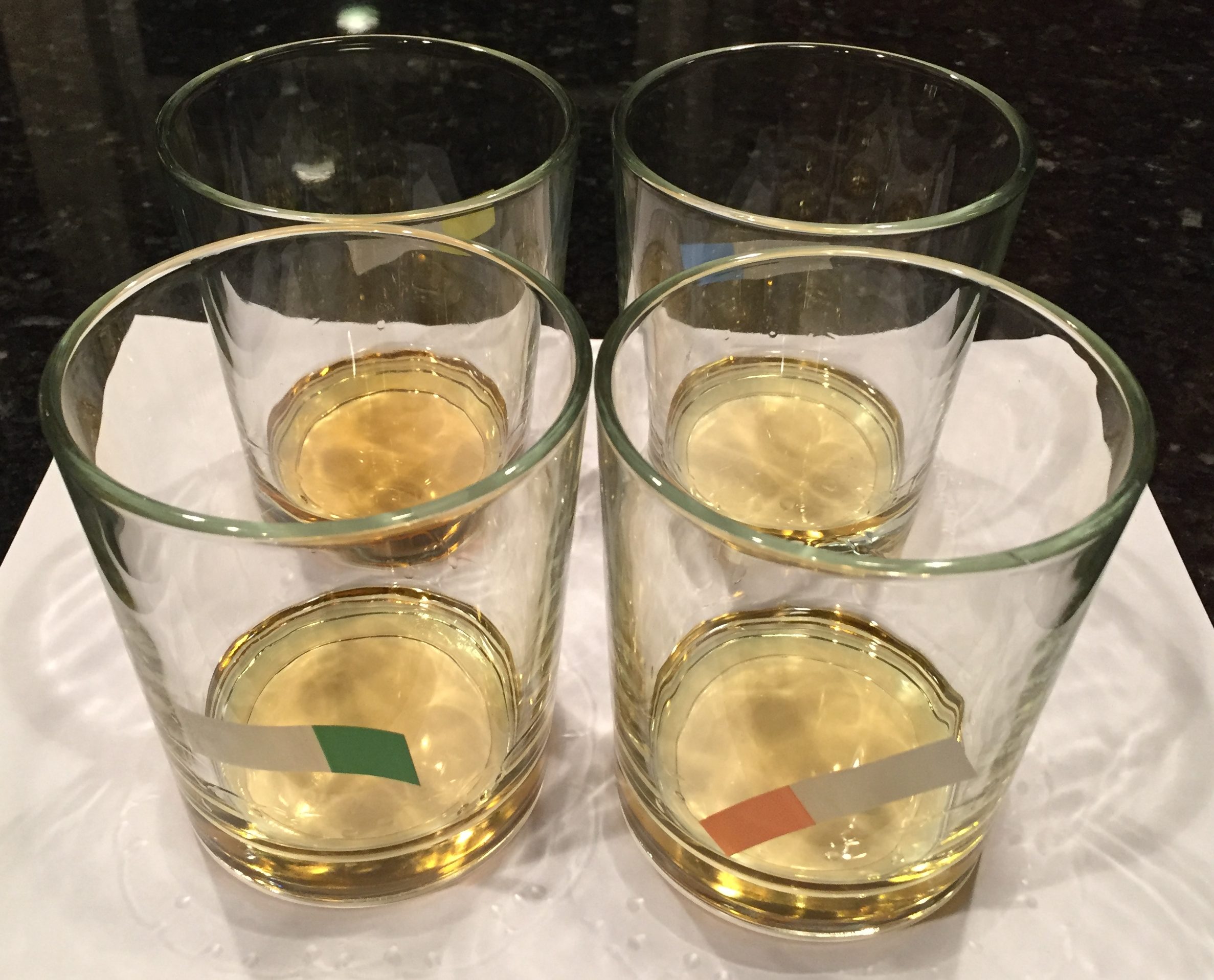 Based on color, my suspicion is that the yellow is either bourbon or rye since it’s darker.  Both bourbon and rye are aged in new charred barrels which typically gives them a darker color.  Scotch and Irish whiskey are typically lighter in color since they often use already used barrels for aging.   Im a little surprised that two of them aren’t dark though.  Yellow seems to be darker for sure, but I can’t easily discern which of the other glass would be bourbon or rye.  Maybe green?

Blue – Very light – almost smells like a wine rather than a whiskey.  Fruity.

I think my nose is maybe crap.  Beyond being able to tell which ones had a strong smell I was sort of lost.  Not sure how one improves their sense of smell but for now this test was almost useless to me.  I can guess that by the strong smell that yellow is bourbon or rye but I can’t be sure.  My suspicion is that it’s bourbon.

Blue – Light  initial taste followed by a smokey aftertaste.  If this isn’t Scotch then my taste buds have to be broken too.

Orange – Sweet and easy to drink.  No noticeable after taste.

The only clear cut winner was the scotch.  Yellow, which I suspect to be bourbon, had the strong flavor I expected but orange and yellow are leaving me in the lurch.

So that wasnt at all easy.  I apparently dont drink enough whiskey but the tests for smell and taste really left me struggling.  What I believe to be bourbon and scotch were easier to identify but rye and Irish whiskey left me guessing.  So here’s my final guess…

Im only fairly confident on blue and yellow.  I made the guess between green and orange based on the dry after taste of green.  So how did I do? 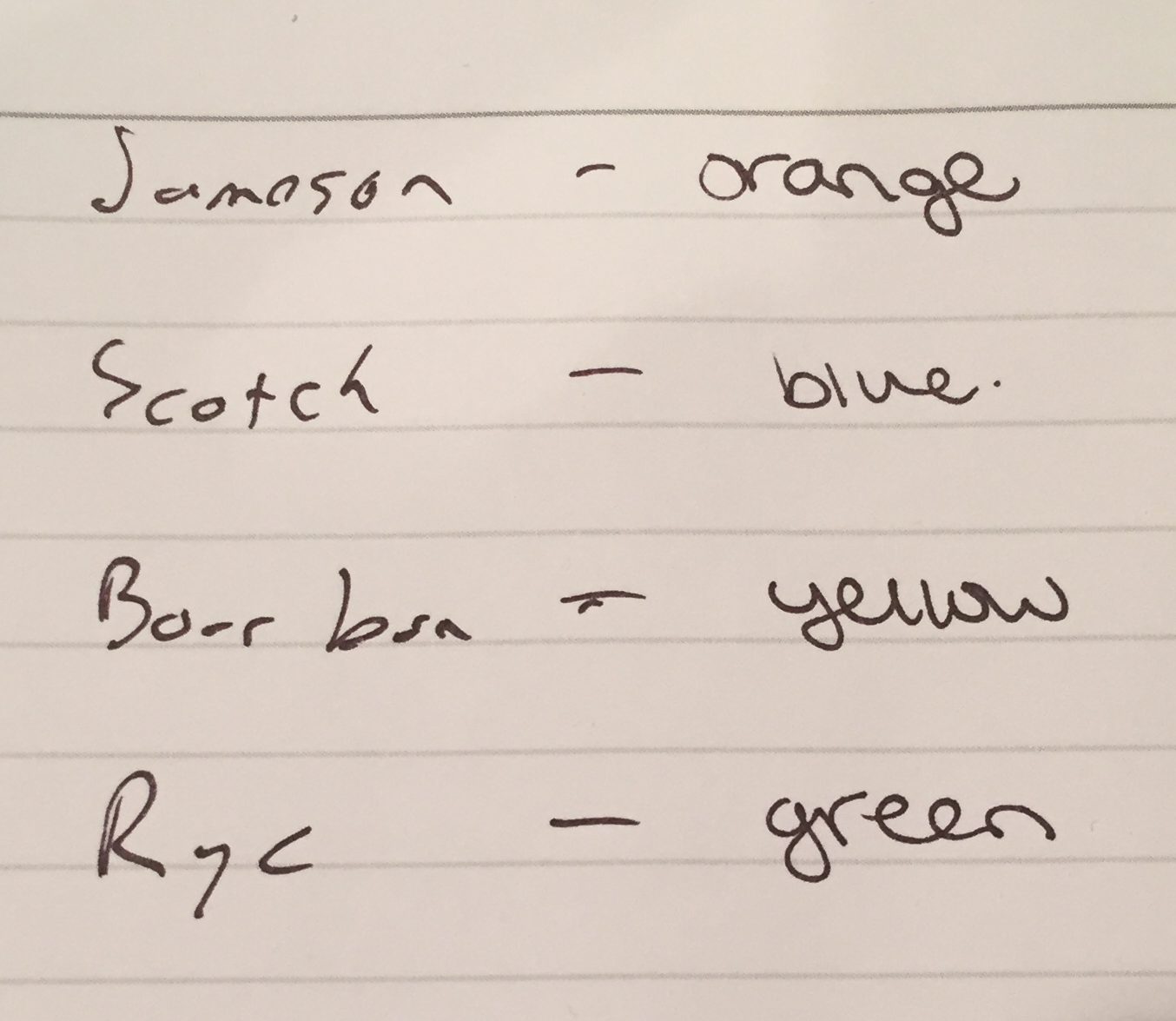 Well – I got bourbon and scotch right and mixed up rye and Irish whiskey.  That was sort of expected I guess, green and orange had left me struggling.  Based on the color test I thought green was the second darkest which would have made sense for rye but the taste and smell test left me hanging.   Im going to try this again in a week or two and see where I land.